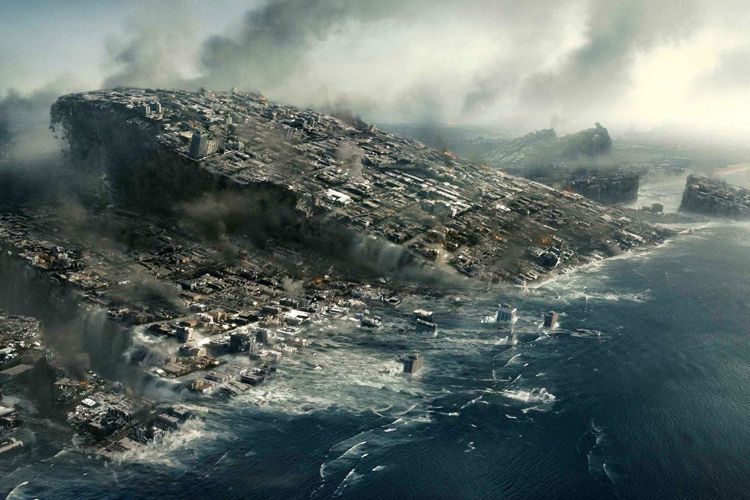 When Thor, Iron Man, Captain America, and the Hulk got together, New York City was left nearly in ruins (save for a few intrepid shawarma joints). So we started thinking: What if all the fictitious damage left behind from action and disaster movies was real… and what would it mean to insurance providers? Check out all of the make-believe damage that would bankrupt the universe. 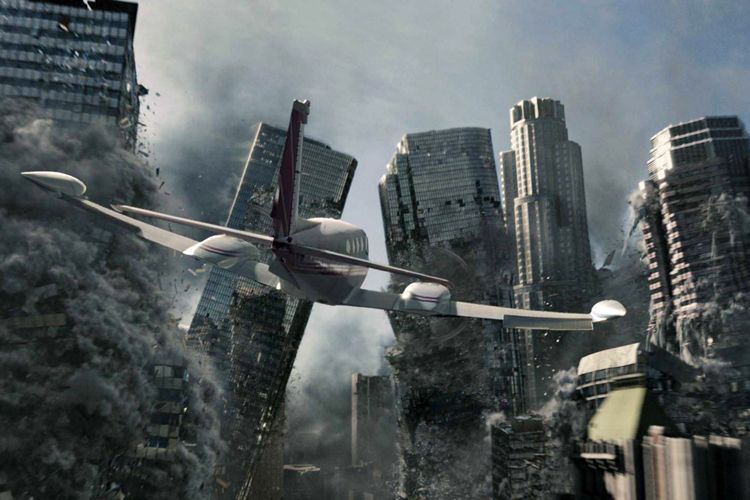 Nature gives the entire world a violent makeover. Oceans rise, streets disintegrate, mountains crumble and nothing is left standing. At all. The very notion of insurance, or civilization as we know it, was washed away in the debris. [Photo Source: Sony] 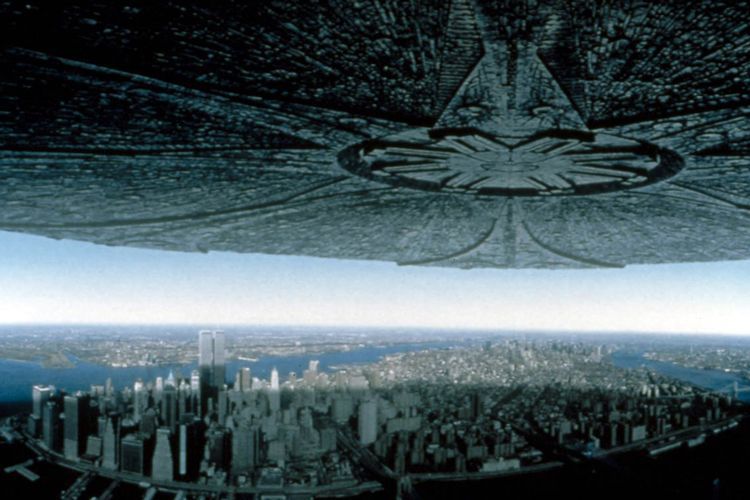 Aliens blow up the White House, Empire State Building, most of Los Angeles, and every other important landmark around the world. When the aliens are defeated we still have a planet, but the destruction would be in the trillions. Might as well toss away those insurance policies and grab a shovel to clean up this mess so we can rebuild. We will not go quietly into that damage assessment meeting! [Photo Source: 20th Century Fox] 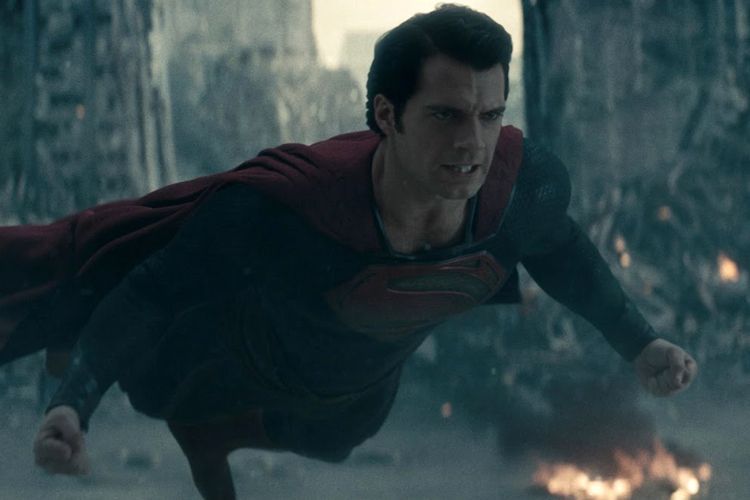 The Avengers took on an entire army of aliens and only decimated certain areas of Manhattan. Meanwhile, Superman’s pursuit of a single, rogue Kryptonian basically turns the once proud Metropolis into a smoking crater. According to Buzzfeed, his “heroics” would have cost an estimated $750 billion worth of physical damage with an economic impact of $2 trillion! But, hey, he “saved” us! [Photo Source: Warner Brothers] 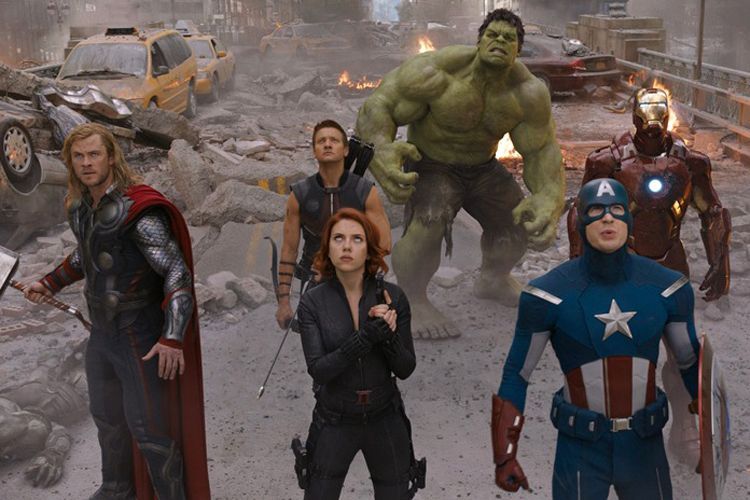 The final battle probably makes property owners and insurance agents more nervous than the alien army trying to enslave humanity. According to The Hollywood Reporter, it would cost $160 billion to fix the damage from the first Avengers movie. Tony Stark (aka Iron Man) might be rich, but according to Forbes Magazine’s “Fictional 15”, he ain’t worth that much. A mere $12.4 billion won’t cut it. Don’t think that splitting up the team will help, either. Captain America’s last solo outing, The Winter Soldier, saw three giant flying aircraft carriers dropped on Washington D.C. [Photo Source: Disney]

The Day After Tomorrow 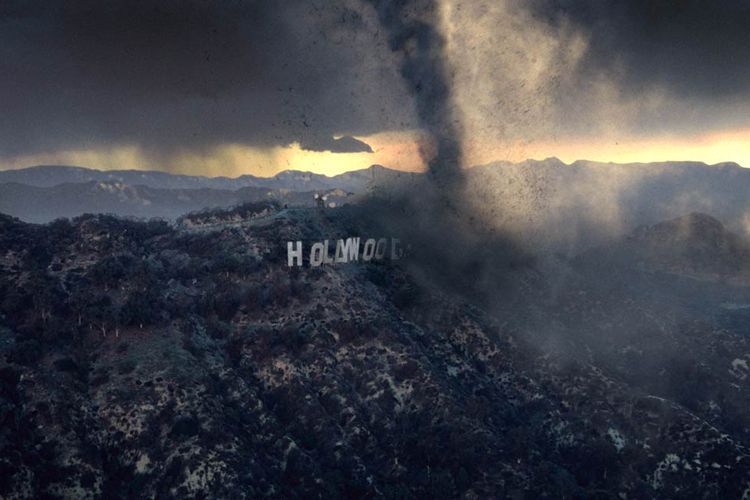 A modern ice age destroys then freezes most of the planet, but the air has never been cleaner and the skies have never been bluer! Everyone knows that weather-related insurance claims are the most headache-inducing of all (“See, you had flood insurance, but technically a giant glacier crashing into your foyer doesn’t qualify…”) so Mother Nature whipping out all of her people-erasing tricks at once would be insurance-ageddon. [Photo Source: 20th Century Fox] 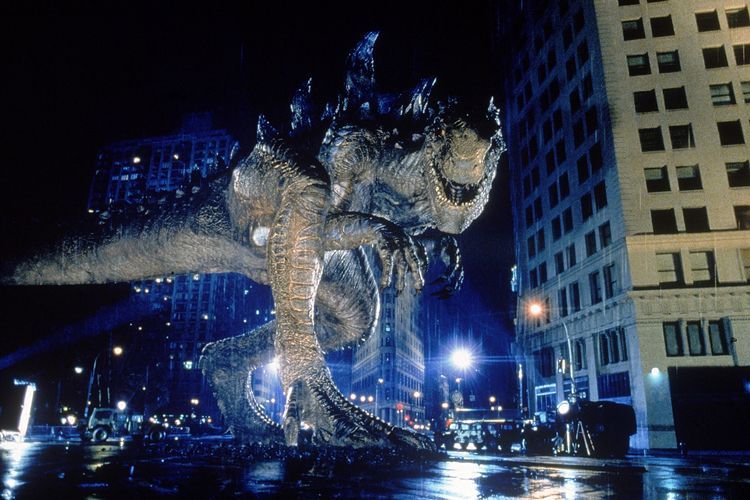 In 1998, Japan’s most famous monster laid waste to New York City (stomping holes through the MetLife Building and laying eggs inside Madison Square Garden before being taken down by the cables of the Brooklyn Bridge) only to return in 2014 and forgo Manhattan for San Francisco like a software engineer during the tech boom. 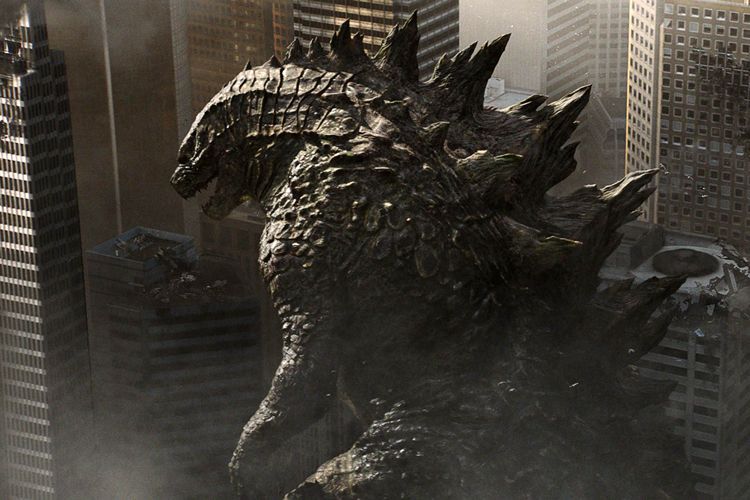 At least in ‘98 he went solo and aimed for recognizable (and more heavily-insured) landmarks, while in SF he had to fight other monsters and spread the damage out. [Photo Sources: Sony / Warner Brothers] 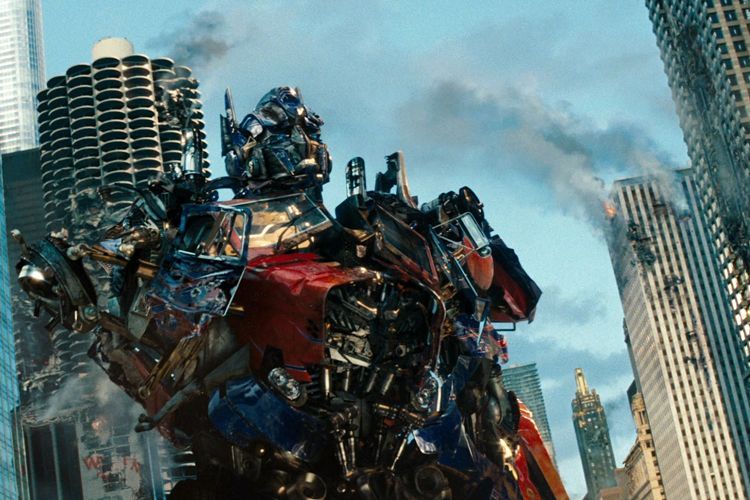 Director Michael Bay has never photographed anything he didn’t want to then immediately blow up, so it’s not surprising that letting him play with giant, sentient robots was an insurance nightmare. In the first film, Autobots and Decepticons smash up a few major cities and the Hoover Dam. In Transformers: Revenge of the Fallen more major cities take a beating, not to mention the destruction of the pyramids of Giza (the film introduced the ironically-named Constructicons, who do more damage than construction). In Transformers: Dark Of The Moon Chicago takes the brunt of the damage. Transformers: Age of Extinction moves the action to Texas, Hong Kong, and China, adding an international element to further complicate the insurance snafu. [Photo Source: Paramount] 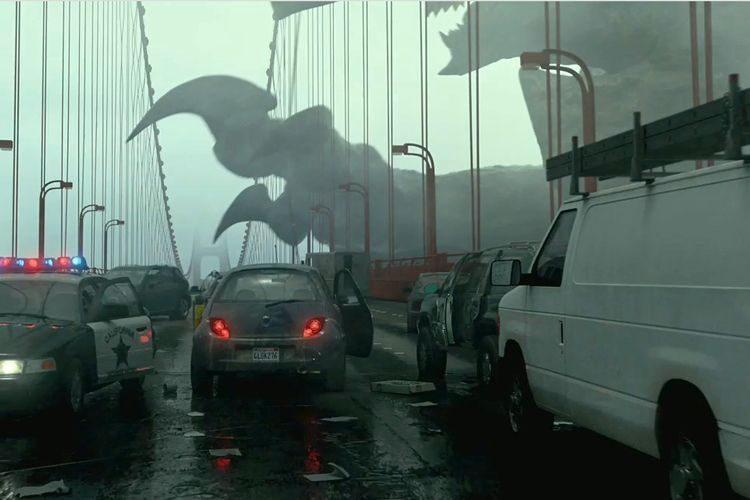 Giant monsters meet massive robots. The good news is most of the fighting is done in the water and around coastal cities. Well, that’s not good news if you live in San Francisco or Japan, but it could have been much, much worse given the fact that humanity’s only response to giant monsters rising from the sea is “let’s make things that will fist-fight them in major cities!” [Photo Source: Warner Brothers] 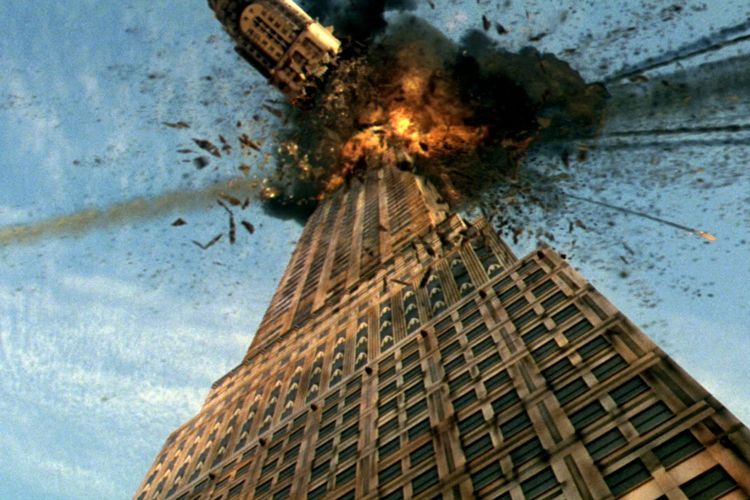 Meteorites take out Paris, NYC’s Chrysler building, and other sections of the planet. However, the giant asteroid the size of Texas didn’t obliterate the earth so everyone owes Bruce Willis a hearty thank you. Plus, according to the Insurance Information Institute, “falling objects, including satellites, asteroids, meteors and space debris, are covered under standard homeowners and business insurance policies.” This is great for insured property owners, but just another reason to keep an insurance agent up at night. [Photo Source: Touchstone]

War of the Worlds 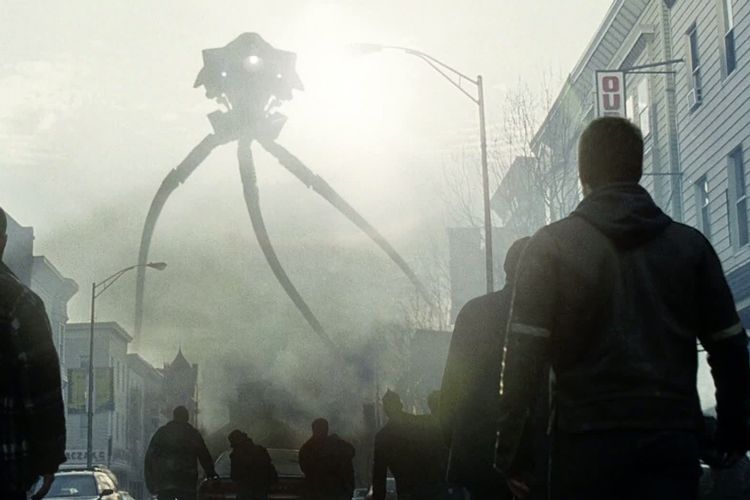 In H.G. Wells’ original 1897 version, aliens have the decency to crash land in the English countryside. When Steven Spielberg got his hands on the story in 2005, he set the action in New Jersey, home of some of the highest property taxes in America. So thanks for that, Steve. [Photo Source: Dreamworks] 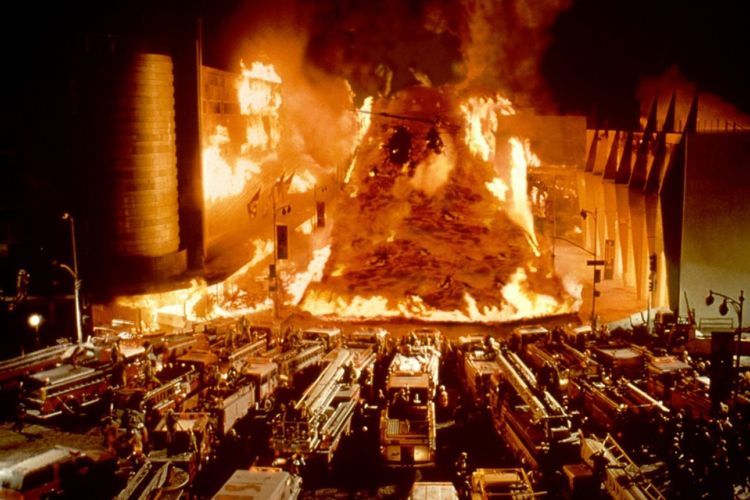 Yes, there is such a thing as volcano insurance, most covering damage that’s the direct result of an eruption, such as ash and lava flow. Others will cover after-effects, like tremors. We can guarantee that most citizens of the greatest Los Angeles area aren’t too concerned with volcanoes… so the one that melts SoCal in this Tommy Lee Jones disaster flick caught everyone with their figurative insurance pants down. [Photo Source: 20th Century Fox] 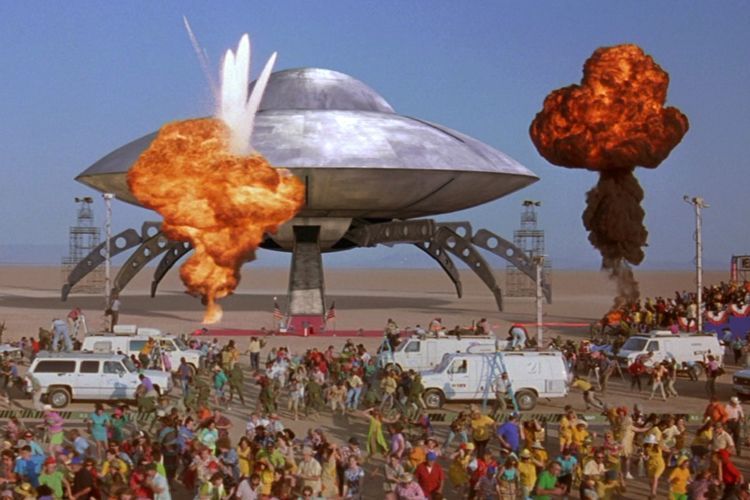 Nothing is safe in this over-the-top alien invasion flick. Some movies will quit with major landmarks like the White House and the Golden Gate Bridge. Not Mars Attacks! It even takes B- and C-list landmarks like the giant Ralph’s Donuts donut in Los Angeles. [Photo Source: Warner Brothers]

G.I. Joe: The Rise of Cobra 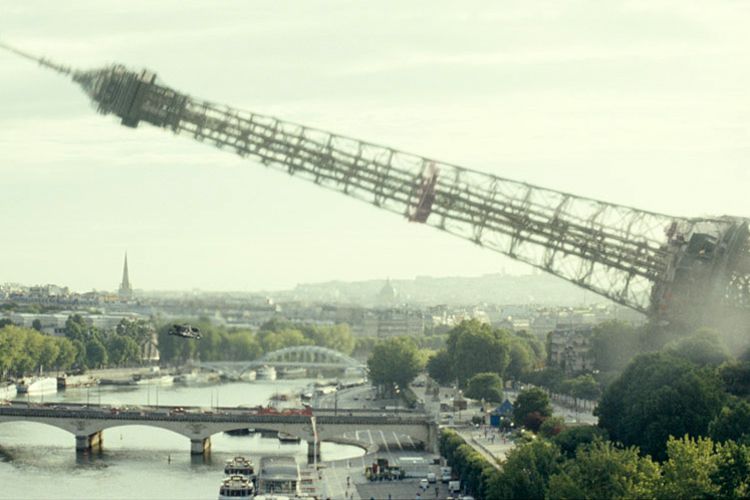 How do you make a proper damage assessment when your buildings are literally eaten by tiny, robotic bugs? Allstate makes provisions for damage created by non-domesticated animals, but we have a feeling they might have an issue with someone trying to pin their claim on nanobots. [Photo Source: Paramount] 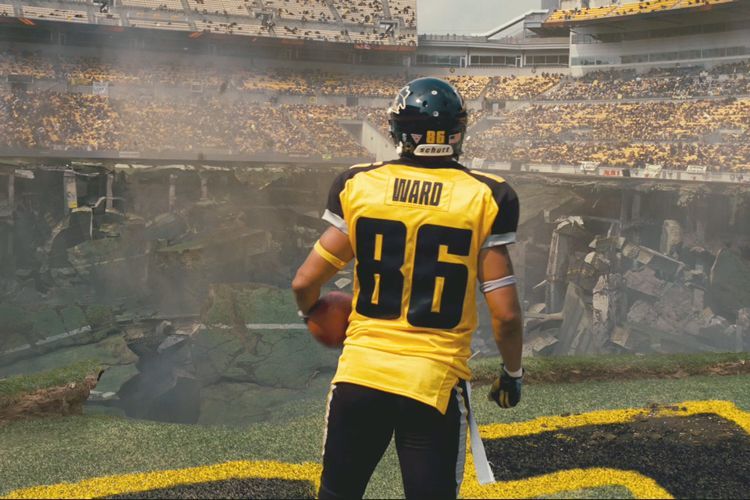 Football stadiums aren’t cheap (Heinz Field cost $357 million). Neither are bridges, but villain Bane detonates both to keep Gotham (which looks a lot like Pittsburgh with a dash of Chicago and NYC) cutoff from the world. Isolating the city and taking out its sports franchises is basically the best way to economically crater a metropolis. [Photo Source: Warner Brothers] 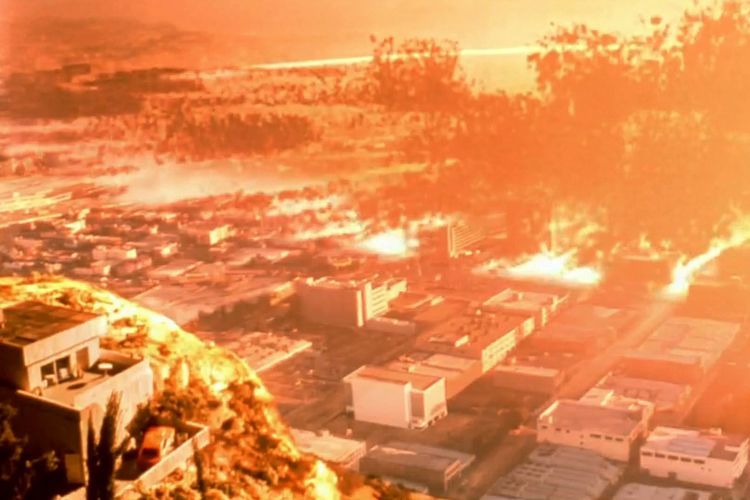 It’s hard to top the Terminator franchises’ one-two punch of world-dominating sentient A.I. and nuclear holocaust. There is no corner of the world left unscathed by Skynet’s destructive force, and if you can even locate the steaming husk of an insurance agent you should count yourself lucky. The newest entry, Terminator Genisys, doesn’t hold much more promise. [Photo Source: Lionsgate] 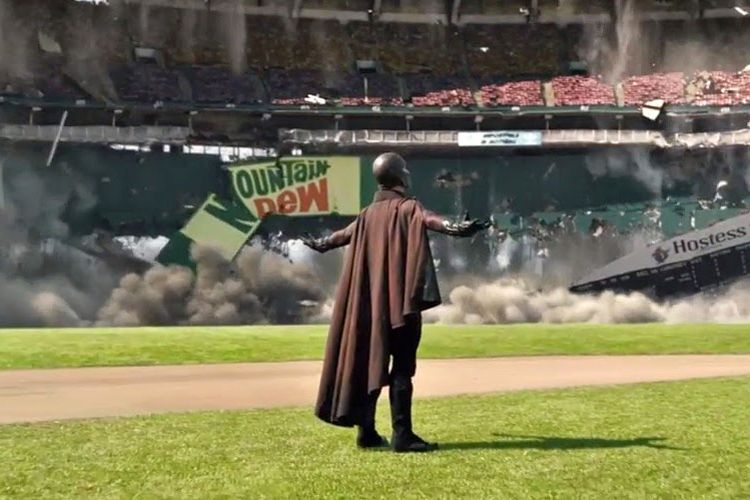 Surprisingly, this Marvel Comics-based franchise wouldn’t be too taxing on the property damage front if it weren’t for villain Magneto’s penchant for dropping large things on even larger things. Like, say, picking up the entire Golden Gate Bridge and dropping it into downtown SF or, you know, using an entire baseball stadium as a paper weight. [Photo Source: 20th Century Fox] 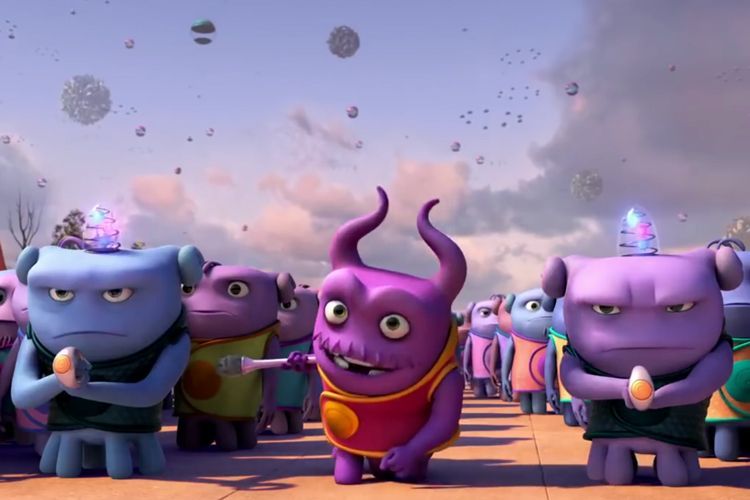 In this “kids” movie, cuddly, smiling aliens that look like squat little plush squids come to Earth and proceed to….burn enormous holes in all of our buildings before forcing all of the planet’s population to co-exist in a small planned community somewhere in Australia. Did we mention this was a kids’ movie and not a horror film? Imagine the insurance nightmare of trying to cover property that exists inside a gated community where EVERYONE lives. Literally. Every. One. [Photo Source: 20th Century Fox]