An emotional struggle between Kasem's children and his wife played out in front of the world. 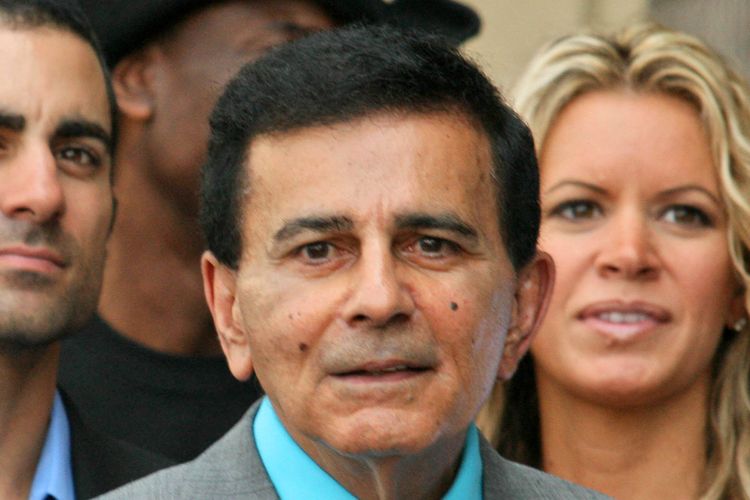 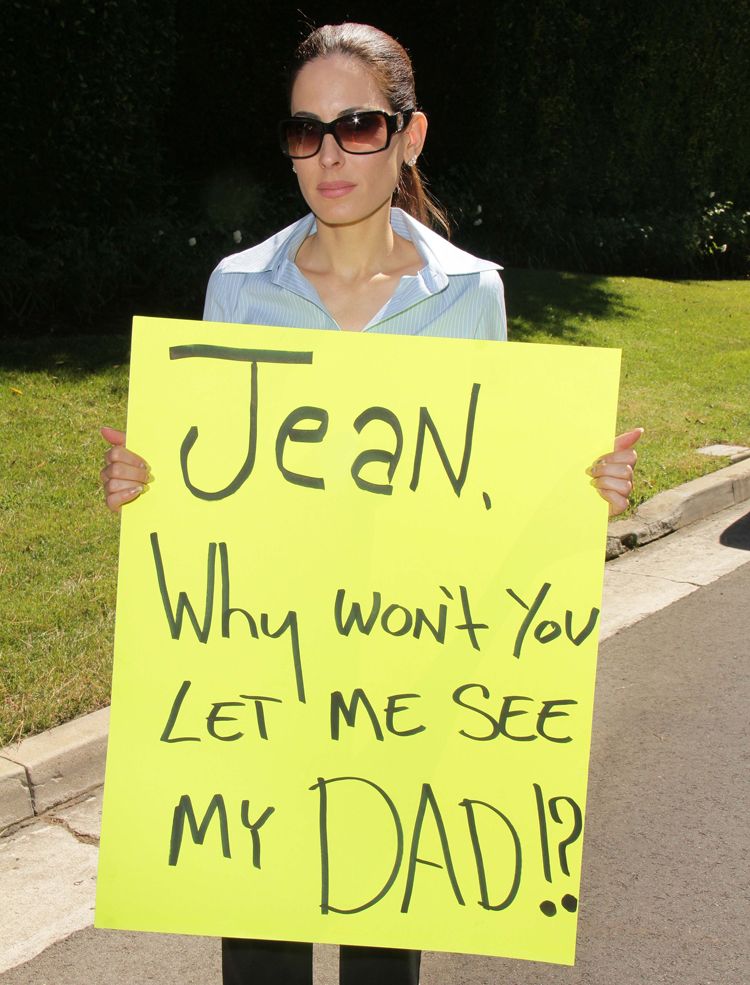 Kasem, 82, best known for his iconic "Top 40" radio show as well being the voice of Shaggy on Scooby Doo, has been reportedly suffering from a form of dementia called "Lewy Body Disease." His daughters and son, Kerri, Julie and Mike, have been in a vicious fight with their stepmom Jean over his care. While it's very easy to be captivated by the drama, here are the important highlights:

—Casey Kasem named his daughter as his Health Care Proxy (also known as a Health Care Power of Attorney) in 2007. This means she has the legal right to make health care decisions for her father if he can't make them for himself.

—A primary physician has to deem Kasem unable to act on his own behalf for the Health Care Proxy to become effective.

—Jean Kasem cut off contact with the daughters last summer (2013), which made providing care for their father impossible. In May, 2014 the daughters put out a missing person report when they claimed he disappeared. Police in Washington State reported he was on vacation outside of Seattle, but a judge still ordered an investigation into why Kasem was removed from Los Angeles without his children's knowledge.

—When Kasem was taken from his house to a hospital in June 2014 his wife threw a pound of hamburger meat at Kerri while her father was being loaded into an ambulance.

—The court recently granted Kerri temporary conservatorship over her father's health care decisions. There's another hearing on June 20th, which could make Kerri the permanent Proxy. 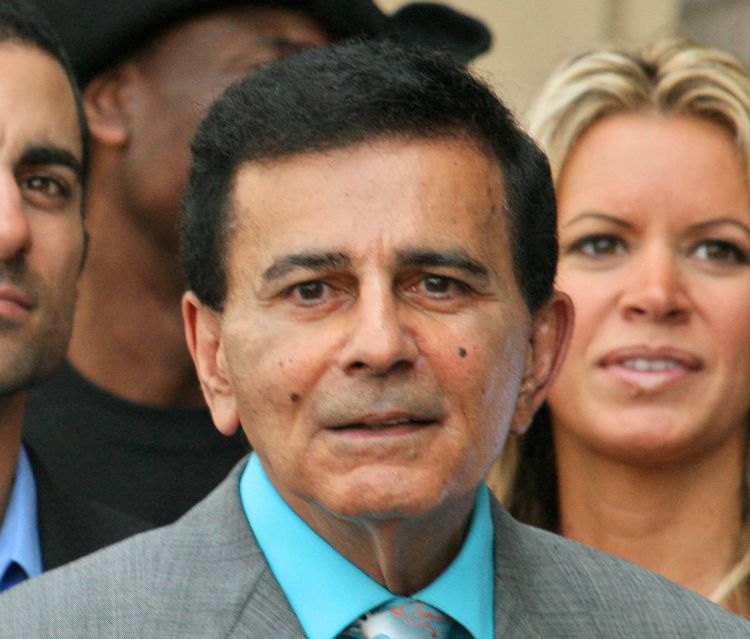 From an emotional perspective, this story is painful for everyone involved. But when you look at it from a planning perspective, there are some positive aspects.

For example: The fact that Kasem named his daughter as his Proxy, and not his wife, allowed his daughters to stay involved in his healthcare decisions. Once his wife violated that document by refusing access, they had recourse and won a court victory.

This story is much more complex that our brief summary and it's tough not to get mired in the muck. But the main thing to think is: If Kasem didn't have any plans in place, it could be even worse. While celebrity families are in the spotlight, many families are torn apart every day when people don't put a plan in place. This includes completing a Will and filling out an Advance Directive, which is the combination of a Living Will and Health Care Proxy. While this might not prevent fights or emotional outbursts—we're all human—it will allow you to reach a legal resolution if it comes to that.

As the family battle rages on between Kasem's daughter and wife regarding his medical care, on June 11th Kerri posted the instructions from her father's Advance Directive on Twitter:

The court’s decision today upheld our father’s explicit wishes as expressed by him in his health directive: “If the extension of my life would result in a mere biological existence, devoid of cognitive function, with no reasonable hope for normal functioning, then I do not desire any form of life sustaining procedures, including nutrition and hydration….” Transitioning our father’s treatment to comfort-oriented care was one of the hardest decisions we’ve ever had to make.

The text in quotes above is taken directly from the Advance Directive form for the state of Washington. Why does this matter? It stems from his wife Jean using the courts to have Kasem's water and feeding tube resumed after it had been pulled. She's asserting that Kerri is trying to hasten her father's death to collect her piece of a $2 million Life Insurance policy. However, since Kasem filled out an Advance Directive alerting his family to his specific medical decisions, the family has a clear picture of what he wants done. The decision to transition from treatment to comfort care, even when you're following instructions, isn't easy and Kerri must rely on doctors to inform her of her father's ability to recover and resume a normal functioning life.

Jean disagrees and her lawyer argued that Kasem's not a vegetable and can communicate, which Kerri's lawyers disputed. With emotions running so high, it's impossible to fully assess the situation from an outsider's perspective. It's easy to offer opinions and pass judgement on either side when it involves celebrities or it's not your family that's suffering, which is why it's important to only focus on the facts. Kasem named his daughter as his Proxy and left clear medical instructions if his health declined.

On June 11th, a judge ruled in favor of Kerri, which allowed her to follow her father's Advance Directive.

On Father's Day, Kerri Kasem posted on Facebook that her father had died: 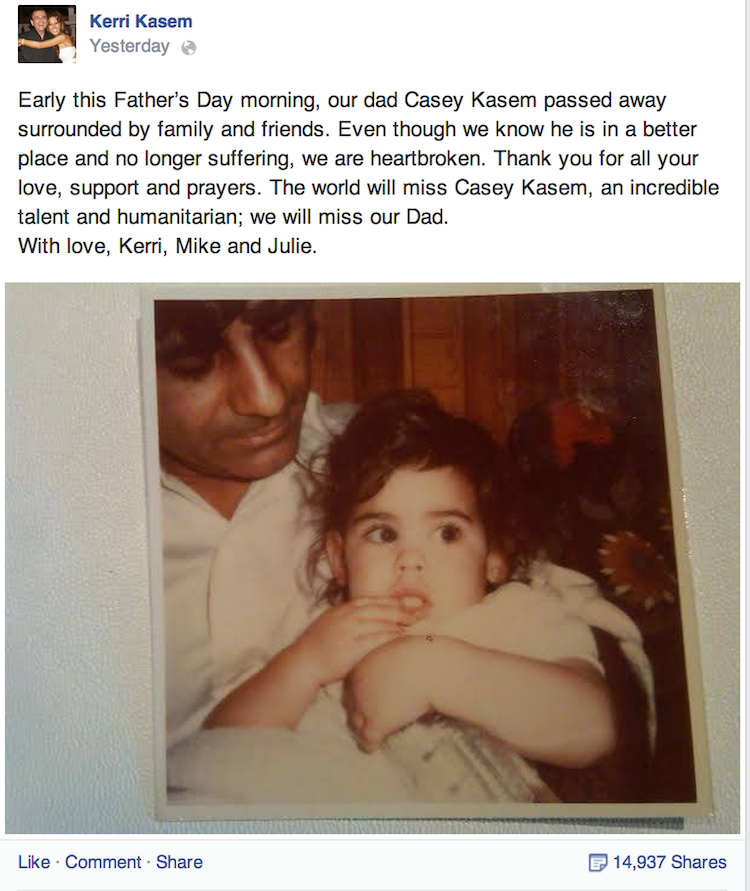 Related Articles: 8 Signs Your Family Will Fight Over Your Estate; Reasons You Should Decline Being A Health Care Proxy