The choice between treatment or hitting the road was an easy decision for Miss. Norma. 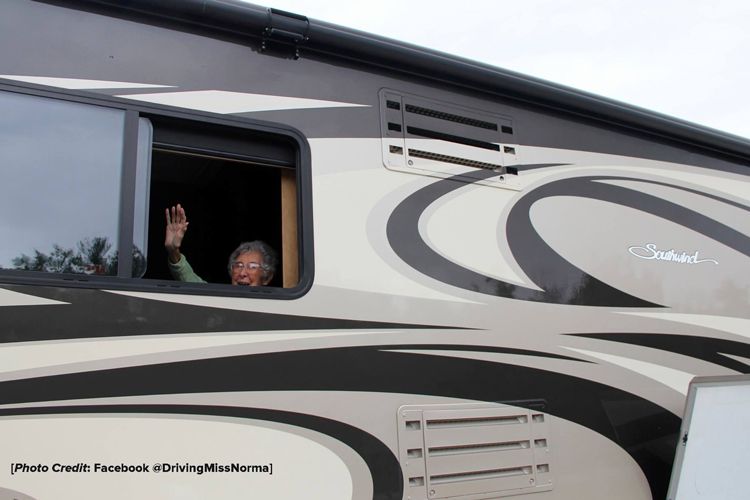 In 2015, Norma Bauerschmidt got some terrible news: She had stage 4 uterine cancer. The diagnosis came just two days after her husband of 67 years, Leo, had passed away in the tiny township of Presque Isle, Michigan. But Norma knew exactly how she wanted to proceed, and the first step wasn’t preparing for surgery or starting chemotherapy. It was climbing aboard an RV.

As Norma’s son Tim and daughter-in-law Ramie explain on their Facebook page “Driving Miss Norma,” she told them before they even met with her doctor to discuss options that she “had no interest in any treatment.” In fact, when the doctor asked her how she wanted to proceed, Norma announced, “I’m 90 years old, I’m hitting the road.” Her doctor gave his full blessing and with that, Norma joined Tim, Ramie, and their poodle Ringo on their RV for a cross-country vacation.

Since the trip’s start in August, 2015, Norma has seen a lot of America. The trio headed west initially, hitting landmarks like Mount Rushmore, Yellowstone National Park, and the Grand Canyon.

Norma toured the alien town of Roswell, made the jumbotron at a Hawks game in Atlanta, and felt the mists of Niagara Falls. Oh, and another special stop? Orlando, for her first-ever trip to Walt Disney World.

Of course, it wouldn’t be a vacation without some great meals. Norma tried local cuisines ranging from a po’ boy in New Orleans to lobster rolls in Maine. She’s also sipped her share of libations — her trip to Colorado, for instance, included a tour of New Belgium Brewing Company.

In an interview with The Pittsburgh Post-Gazette, Norma said that she’s especially enjoyed her hot air balloon ride in Kissimmee, Florida and tour of the USS Gerald R. Ford aircraft carrier. (During World War II, Norma worked as a nurse in the US Navy WAVES — Women Accepted for Voluntary Emergency Service.)

Tim and Ramie initially thought Norma wouldn’t make it to Mount Rushmore, but she kept on truckin’ for over a year. Her social media posts about each new adventure brightened people’s days and made the topic of end-of-life care and dying much more approachable.

Sadly, all great journeys must come to an end and Norma passed on September 30, 2016. Her legacy will live on in a book The Bauerschmidts are writing about their unconventional trip, which is sure to inspire people to live their lives to the fullest regardless of the circumstances.