A walker on the wild side. 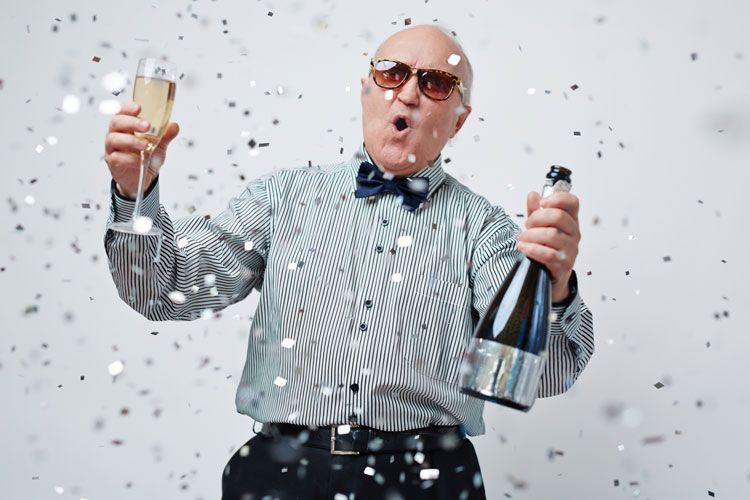 Contrary to popular belief, nursing homes are more than just some kind of middle ground between a B&B and a minimum-security prison — they can be havens for the kind of rowdy, rebellious, and ribald behavior you’d think people were designed to age out of. But it turns out that housing a bunch of elderly people together can be the perfect cocktail for shenanigans. Here are some prime examples of serious senioritis.

When the son of an 85 year-old resident of the East Neck Nursing Center in West Babylon, New York came to visit his mother one day, he was shocked to see that her commissary money had been converted into dollar bills. He was even more shocked to see a picture of his dear, sweet mom stuffing those bills into a dancer’s g-string. It turns out this was not an isolated event, and that the nursing home was in the habit of bringing in adult performers as an “entertainment event” for their residents.

A 79 year-old great-grandmother in Ireland decided one night that she needed to go out and get some fresh air. Actually, make that some fresh ink. It seems Sadie Sellers felt strongly that 80 is the new 20, and wanted to get her first tattoo — and didn’t care that she had to go AWOL to get it done. Sellers got a heart on her arm and claimed to be a little disappointed that it didn’t hurt more.

Booze Is The New Tea

Starting in 2014, Forbes magazine noticed a trend: More and more senior living centers were applying for liquor licenses. Sure, for the occasional champagne brunch and restaurant-style dining experience, as these facilities will tell the kids and grandkids who are footing the bill. But introducing ready access to beer, wine, and liquor to people who don’t have to go to work and don’t have much to do could be problematic. As Forbes contributor Robert Laura writes, “Thousands of boomers are retiring every single day, and they are not only likely to continue their drinking habits, but also increase them as a result of boredom and their desire to ‘feel better.’” Then again, others may see it as glorious eternal happy hour.

Sordid Tales From The Villages

How can one retirement community be the source for so much debauchery? Do we even have to mention that it’s in Florida? Yes, The Villages is one of the state’s largest senior communities, with a ratio of 10 women for every one man — one resident was quoted in a Daily Mail article saying, “turn your back for a minute and someone will try and steal your husband.” This has led to accusations of swinger parties, black market Viagra sales, and at least one recorded incident where a 68 year-old resident named Peggy Klemm was caught having sex in a public square with a man 19 years her junior. The incident was honored by a local bar that designed a “sex in the square” cocktail in Peggy’s honor. Again… Florida.

Hooked On A Feeling

Local Philadelphia paper The Intelligencer uncovered one of the more unusual perks to being among the few seniors who can get around on their own. A man in his 70s living in an assisted living facility in Montgomery County, Pennsylvania would not only go on booze runs for his less-mobile neighbors, he’d use his time away from his room and board to hire prostitutes. He was kicked out of his residence when staff discovered him trying to hide a lady for hire under his bed.

Prostitutes, public nudity, drunkenness — that’s nothing compared to what’s going on north of the border. Residents of a Mississauga, Ontario assisted living facility were told that their bingo games were actually in violation of local gambling laws and were thereby illegal. Rather that go through the channels to obtain proper licensing and certification, the residents kept right on going running their illegal bingo dens in flagrant defiance of the law.

If you’re spending your twilight years in an assisted living facility, you’re going to have a lot of free time on your hands. Rather than waste away knitting tea cozies for your ungrateful children, you could do what the residents of a Westlake, Ohio facility did and shoot your own tribute to the Beastie Boys’ “(You Gotta) Fight For Your Right (To Party).” MCA, Mike D, and Ad-Rock would be proud.