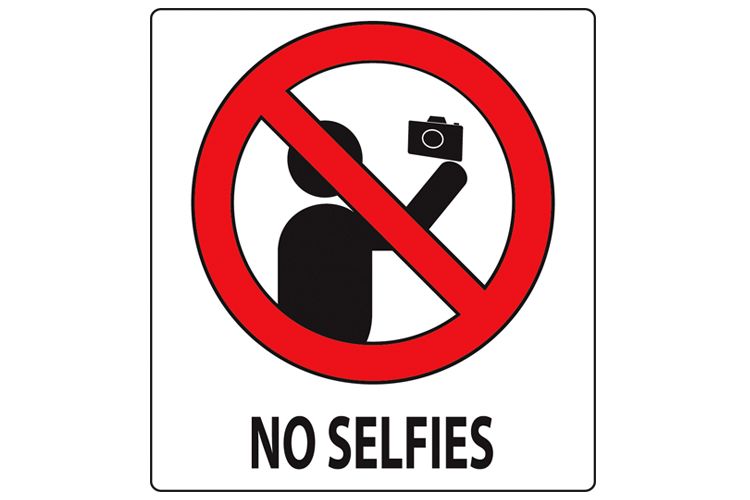 Most problems in this world aren’t easy to fix. Disease. Hunger. Justin Bieber. But we’ve isolated one issue that can be completely eliminated overnight if we exercise the slightest inkling of decorum and self-control: Inappropriate selfies.

In the past we’ve covered the dubious trend of funeral selfies, where the clueless take shots of themselves at these solemn events, often including insensitive hashtags to garner more attention. This callous trend has also tarnished sacred memorials honoring Martin Luther King, Jr., Vietnam veterans, 9/11, and the Holocaust, to name a few. It’s so pervasive that it isn’t even that shocking when people are caught preening in front of their phones during ongoing disasters, as we recently witnessed firsthand when a building in NYC exploded, killing two in the blast and ensuing inferno.

In response, The New York Post ran this on its front page: 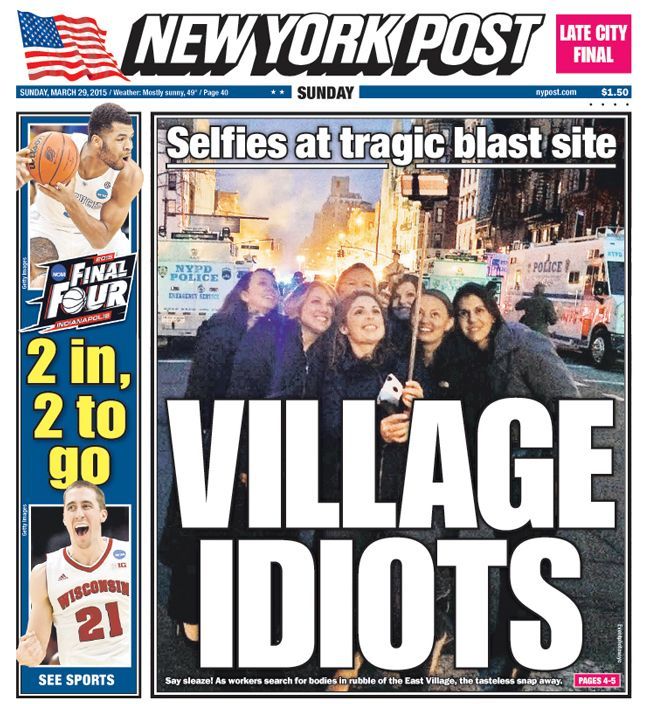 This is the only inappropriate selfie we will ever post on this site. We don’t want to promote this practice in any way, which is how we can all begin to eradicate the problem.

It might feel satisfying to see selfie-perpetrators shamed, but it doesn’t get to the root of the problem — it makes it worse. Selfie-shaming either rewards the person who did it with undeserved attention they crave, or it continues to beat the guilty party into submission once they admit it was a terrible, thoughtless mistake.

The real questions we should be asking:
1. Why do people do this in the first place?

Oh, The Lack Of Humanity 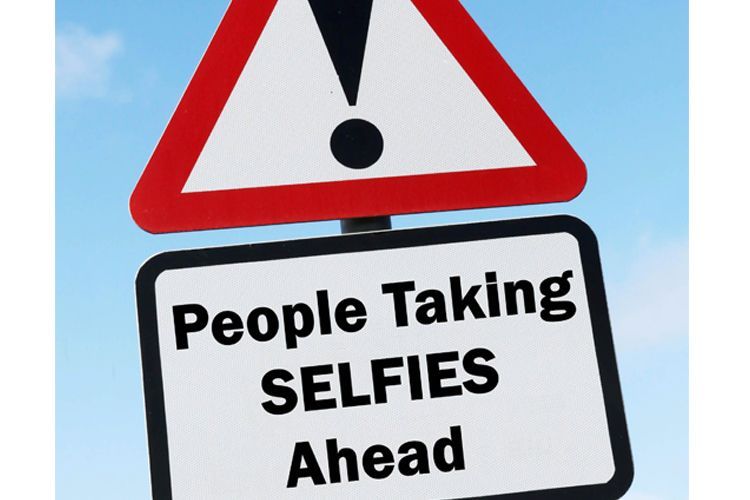 I’m no Dr. Phil, nor do I want to be, but selfies aren’t always about extreme narcissism. They’re usually harmless fun. The same way people used to turn their old point-and-shoot cameras on themselves when they didn’t want to bother a passing stranger, smartphones have made it simple to become a party of one. Want to show your best friend you’re at the Grand Canyon while she’s stuck in her cubicle? Want to make your kids laugh with a goofy face while you’re away on a business trip? Want to see how your hair looks without having to get up and walk to a mirror? Selfies can be endearing, funny, and make you feel good about how you’re looking that day.

But with great technology often comes little responsibility. Nearly every human has a phone that can take pixel-perfect photos and beam them around the entire planet in a matter of seconds. Moments that would once fade into our memory are now captured forever and sometimes shared beyond our control.

If you didn’t grow up with this technology, you’re probably thankful. I’m terrified to think of what 15 or 20-year-old me would be posting on the Internet if it was this easy. So rather than judge and wag fingers, let’s accept this technology is tailor-made for bad judgement.

It’s like riding a motorcycle: It’s not about if you’ll get into an accident, it’s when. The severity of the accident could range from a tiny skid-out to full-on catastrophe, but it will happen at some point.

The amount of photos being shared online is staggering. According to Business Insider, in 2013 Facebook alone accounted for 350 million photo uploads each day. KCPB’s 2014 Internet report puts the total number of photos uploaded and shared per-day at 1.8 billion.

With those kind of numbers it’s understandable that a portion might be in poor taste or downright offensive. It’s also reasonable to think that the majority of the photos you take can easily disappear into the infinity never to be seen or heard from again.

On the other hand, it’s this perceived anonymity and constant onslaught of media options that land us in trouble. It ups the stakes to garner attention. Along the way you might share something that your friends or Instagram/Facebook/Twitter followers would find funny; once it expands beyond those parameters you will be judged by strangers who know nothing about you or your sense of humor. Even the most harmless intentions taken out of context can appear nasty and offensive, which is why we must all take swift and decisive measures.

Now, for the solution to this problem…

It’s really that simple. Here’s an easy-to-remember checklist to help you avoid the inevitable anguish and outrage caused by an inappropriate selfie.

Use these examples as your guide:

When it’s your pain it’s a different story, right?

If after all this self-reflection you still have an uncontrollable urge to take an inappropriate selfie, DON'T post it on any of your accounts. Treat it like a letter you wrote in anger but have no intention of sending. And, if upon deeper reflection and soul searching, you still need to post it to the world, seek medical attention immediately.

We don’t want to discourage anyone from capturing as many moments as they possibly can. Photos are a vital aspect of life. They preserve special memories and provide comfort when we’re sad. They keep history alive for generations to come. The ability to take as many images as we please without having to go broke at the local Fotomat is by far more blessing than curse. (Ed. Note: If you don’t know what a “Fotomat” is, ask your parents or the nearest person over 40.)

You should visit every important memorial on the planet and fill up your camera roll with pictures you want to share with the people you love.

Stand safely behind barricades if you feel the need to document a disaster, especially when it showcases heroic acts or strangers coming together to help those in need.

If taking a photo at a funeral will offer you a modicum of comfort and won’t interrupt or offend anyone in attendance, who are we to judge?

The only thing we’re saying to everyone in this beautiful world of ours: If you’re photographing something that deserves respect or discretion, please keep your big dumb head out of it.